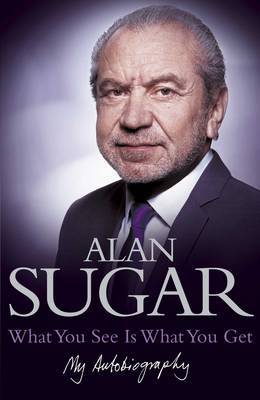 I’ve been extremely lucky recently with some book recommendations. I’ve been recommended a number of titles including “Who Moved My Cheese?”, “Tipping Point” and “When I Stop Talking You’ll Know I’m Dead”.

Both my father (coincidentally a “Happy Anniversary” to my parents today) and brother-in-law have been reading Alan Sugar’s autobiography recently – called ‘What You See Is What You Get’ and they kept saying I should read it. My brother-in-law was first to finish it, and I read it cover to cover in under a fortnight. I just couldn’t put the thing down. For the first time ever, I missed my tube station on my way home from work!

Sugar is incredibly frank in the book. He regularly refers to a number of his suppliers and customers as tossers, wankers and other similarly colourful adjectives. He is completely transparent when it comes to costs and profit margins in certain deals, and just as open to boast how he screwed over a number of retailers at certain points in history.

Sir/Lord Alan Sugar’s early years are just as interesting as his recent political appointments. I found it fascinating how he watched road workers digging up lumps of wood in the 1950s that burned really efficiently and so he sold them to his neighbours. He bought a batch of radios that didn’t quite work, so he setup a production line at home to tweak a single component in each radio to enable them to work. One night all his stock was stolen from his rear garden, so he build a concrete out-house. Self-made? Quite literally.

At the start of one of his chapters he explains how a psychotherapist would have a field day with him. That’s an understatement. He switches from this openly caring fellow to admitting he was bored senseless at the lunch table with the Queen (not sure if he would have been knighted after being so open with his encounters with royalty).

His time as the owner of Spurs is interesting because up until that point, he’d made his fortune simply by buying cheap components, assembling them and selling them – making a good profit along the way – how simple could a business be. Suddenly at Spurs he was juggling mega-personalities – Venables (my opinion of him has changed), George Graham, Jürgen Klinsmann, Darren Anderton (my opinion of him has only been reinforced), the list goes on.

Personally I found the chapter on Sir/Lord Sugar describing his encounters with other Premier League chairmen and their negotiations with Sky the most interesting. I’ve had the fortune to work with some Premier League chairmen, and after building up my impression of Sugar via the first few chapters, I couldn’t imagine someone more opposite to the chairmen I know. So when he describes the meetings, I found myself cringing at some of the tales.

Sugar is hugely opinionated (one of the reasons we all like The Apprentice so much). Despite most of the country disliking Gordon Brown, Sugar joined his team at Brown’s lowest rating. He sacked Venables. In fact, he sacked a lot of people. This all sounds terribly negative, and is balanced in the book by acknowledgements of making many of his employees very wealthy in their own right.

Before reading Baron/Lord Sugar’s book, I read Jerry Weintraub’s autobiography. Both are self-made, hugely successful businessmen with the same culture and principles to help guide them through life. OK, Jerry is American and naturally a lot more brash. Sugar is typically English and keeps repeating “Bloody hell, I grew up on a council estate in Clapton, and here I am doing blah” – eating with the Queen, 4 prime ministers, TV celebrity, floating his business on the stock market – the list just goes on and on.

What’s nice about Baron/Sir Sugar’s book is the level of detail. At first, 600 pages seems too long. But like many well written books, the pages just whizz past and your detailed knowledge of the author becomes deeper and deeper.

A thoroughly enjoyable, addictive book. Especially if you’re a psychotherapist.