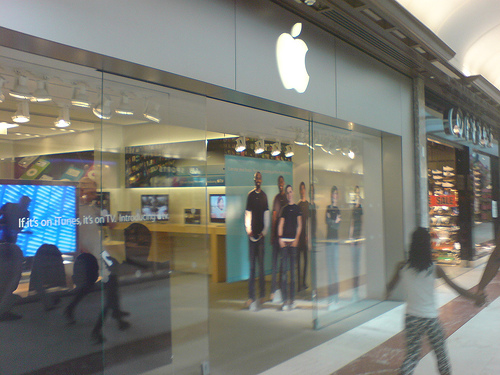 I still have an iPhone 3GS, or an “iPhone Classic” as I like to call it. Last Saturday evening the screen, which has had been cracked for so long that I can’t remember when it happened, smashed into hundreds of pieces.

The pieces remained together and amazingly the touchscreen still worked, but pieces were soon falling out and it was less than ideal. Usually I’d have called IT (it’s a work phone) and they’d have sorted out a replacement, but I had a work trip planned that week and was concerned that I might not have a phone whilst away.

So for the first time, I walked into an Apple store. I’m not a big Apple fan – the only Apple product I have is the work phone, and the kids each have an iPod Touch. No iPads, iMacs or Apple TV (why isn’t it called iTV?) So I’ve never needed to visit an Apple store before – except for the time we were in Paris, extremely cold and raining and took the kids into one just for some shelter.

Back to the story – I went to the Apple store in Brent Cross and it was busy. That’s an understatement – it was packed. I was directed to the “Genius Bar” and a friendly man said that he would need to book an appointment with someone who could fix the screen. I explained that I was going away, and he said he’d help me there and then.

During the next twenty minutes, he backed up my phone, replaced the device, upgraded the software and restored my phone. Through the entire process he apologised for delays, kept smiling, and chatted about why he worked for Apple, asked why I liked my phone, and was just generally helpful. A true ambassador for the company.

I mentioned a while ago that I’ve had a Dell laptop on order since early January. The current shipping date has moved further out, to mid-March.

To make matters worse, the specific laptop that I am waiting for is being advertised on the London Underground, websites, and newspapers. Yet you can’t have one for another six weeks.

I get the feeling that Apple would be embarrassed if a product took eight weeks to arrive. It would be unacceptable. When I have contacted Dell, there’s no sympathy or explanation for the delays (except ‘some parts are on order’) – it’s the opposite experience of Apple.

6 thoughts on “A lesson in customer service from Apple”