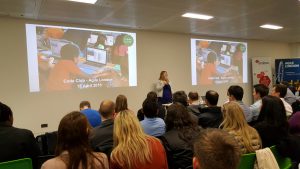 Tonight felt like it had more people attend than any previous event – there were 120 seats and we had to bring more into the main CodeNode meeting room.

The event kicked off with Kate Wilsea from Code Club. The organisation was set up about four years ago to inspire more children to… code. Code Club now reach over 65,000 kids across 4,000 UK locations, and have now opened up to Ukraine and Brazil.

If you like the sound of Code Club, you can help support them on JustGiving.

We then heard a highly amusing and interactive session from Chris Matts, who described the seven deadly sins of Agile:

Chris underlined how important culture is to the success of Agile. I completely agree – if you don’t have the right culture to experiment and avoid long term commitments, Agile won’t work.

Chris then encouraged the audience to confess some of their Agile project ‘sins’. Tales included hiring consultancies who sell themselves as experts and paying for consultants who had no experience; and many big bang stories.

After Chris had finished his presentation, Endava’s very own George Anghelache spoke about some of our large scale Scrum projects.

He spoke about a four-year old programme with over 150 people on the project.

George agreed that culture is vital to implement Agile. But what is culture? It’s the freedom to experiment, with open feedback from senior managers, technical staff and customers.

Start with Agile incubator teams, consisting of thought leaders (we call them Agile champions), and high performance people who can hit a high velocity and are good at planning, estimation and automation.

George also recommended choosing a good project to start with. At around six teams, experiment with some scrum scaling to overcome the inevitable scale issues.

The team will need to start looking further ahead, synchronising the backlog across the teams, and thinking creatively about blockers – perhaps do some prototyping when waiting for issues to be cleared.

He showed an Agile organisation slide (see the photo) with a Business SoS team who can help differentiate between really important priorities such as regulatory or compliance system features and “it would be great to…” enhancements.

This was the fourth Agile London event I’ve been to and if you’re either working on development projects or (especially) business change and want to learn more about Agile, it’s worth coming to a couple of events.

I spoke to a few people afterwards who work on traditional waterfall projects and their faces said it all. They can see the value of Agile methodologies but don’t know how to deploy it across their organisation. They need to bring more colleagues along to the next event.

Thanks to Matt for pointing out the event was at CodeNode. For clarity, Code Club is the charity which presented, and CodeNode was the location of the event. My apologies for the error.