I can’t believe it’s been two and a half years since I last wrote about the Akamai State of the Internet Report.

The latest Akamai State of the Internet report has been released and as usual it’s interesting reading. The Internet continues to grow at a fast rate, both in terms of the sheer number of users and connectivity speeds. Unfortunately the side effects of security also continue to increase.

Akamai is a huge cache network of servers that make it faster for end users to access websites, and usually cheaper for the website company.

This means that Akamai stores the pages that we visit on a server closer to our computer. So when you visit say, www.domain.com, you might go to an Akamai server to see the content rather than domain.com’s server.

Akamai serves approximately two trillion requests for Web content every day. In the second quarter of 2012, over 665 million devices with an IP address, from 242 countries/regions, connected to Akamai.

Bearing in mind that in some cases multiple individuals may be represented by a single IPv4 address (for instance everyone in your home will probably share a single IP address, and most companies work on this model too), so this is likely to equal around a billion users.

Some highlights from this quarter’s report are below.

For users of  mobile devices across all networks (Wifi and the various cellular data networks), Apple’s Mobile Safari accounts for approximately 60% of requests, indicating that significantly more users of iOS devices use these devices on Wi-Fi networks — heavily driven by iPad and iTouch usage.

If you look at pure cellular data, the most common web browser is Android Webkit, which indicates a significant number of iOS users only use Wifi. 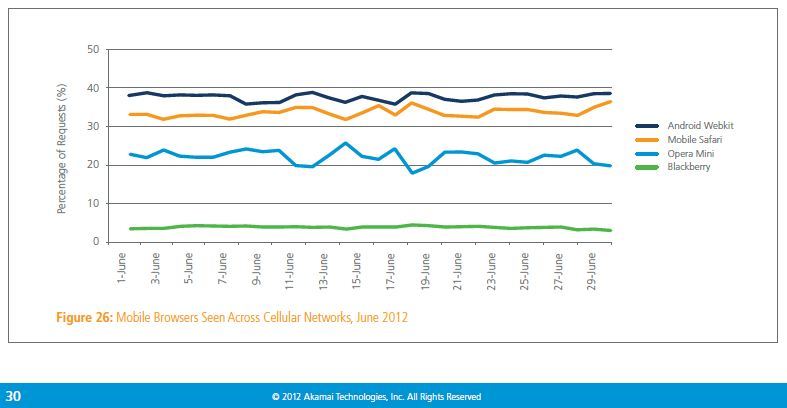 The full Akamai State of the Internet report can be found here.