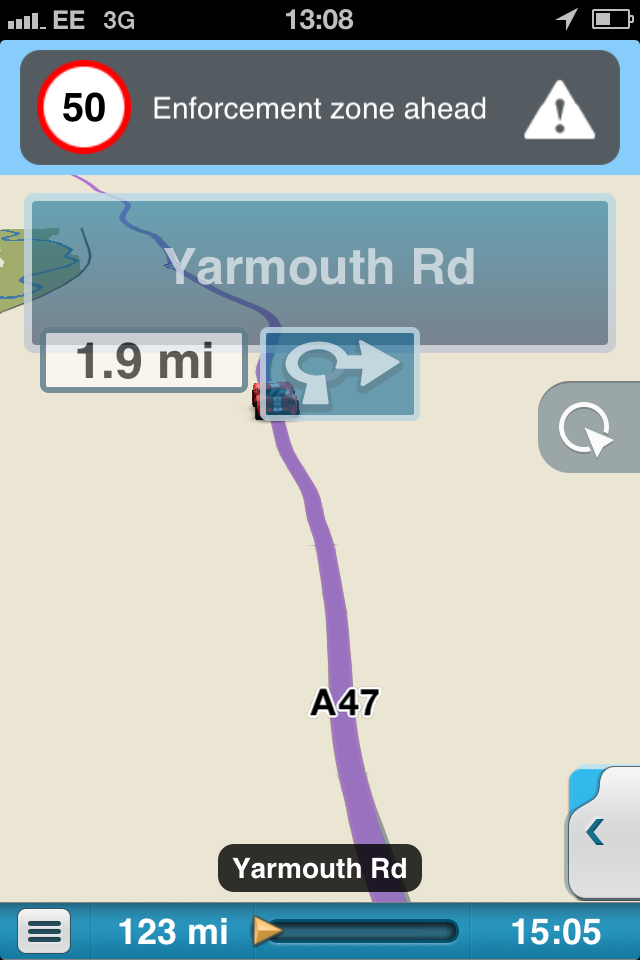 The Howard family went away for the weekend to Norfolk on the weekend. There are six of us, and we try to get out of London every couple of months, so we pack into the family car and head off for the countryside.

We used to use Maps on the iPhone as a navigation tool rather than a specific GPS. The truth is that by the time GPS devices came down in price, my iPhone seemed a better option, especially as our car stereo has a USB port which both charges the phone and plays Spotify.

The only thing that annoyed me about the old Maps app on the iPhone was that the route line would overlay the traffic line. This must have been a huge oversight by Google because surely you want to know the traffic along your route.

As soon as I upgraded to the latest iOS, like all other Apple users I wanted Maps back. The new one is poor to use on a local level, and awful at long distance travel.

I downloaded some other mapping tools but they just weren’t reliable or good enough for one reason or another.

During the summer we had gone on a family visit to Israel and a friend of mine, Yoav, showed me a mapping app which his company were in the process of producing for the iPhone. In Israel, where Waze is the predominant smartphone app, any new apps needs to be even more innovative and easy to use.

A received an email from Yoav recently to say that his M8 app had been released to the App Store.

Even on my iPhone 3GS, M8 is superb. It has voice turn by turn instructions and the whole interface is designed perfectly for the driver, including a route overview showing arrival time and how far through the journey you are. It also warns when approaching a speed camera (see the screenshot above).

And M8 is almost unique among free iPhone navigators in that it automatically selects a new route when you drive past the junction it’s been counting down to for the last few miles (I tested this feature a number of times!).

The only part that didn’t work for me was the traffic updates – I kept getting an empty screen, although I suspect this has more to do with Vodafone’s appalling 3G signal throughout Norfolk.

On the subject of traffic, we went on holiday with another family, and used the excellent Find My Friends to see how far ahead on the journey they were.

However there are so many apps that use maps, we need to start seeing more integrated apps, so that we can overlay all these functions together – traffic, friends, journey, and points of interest. Even Google Lattitude, the forerunner to Find my Friends, runs as a separate app to the other Google apps.

If you haven’t used M8 yet, and are still frustrated with the appalling iPhone Maps, I recommend downloading it soon.

2 thoughts on “And the best free iPhone map app is…”