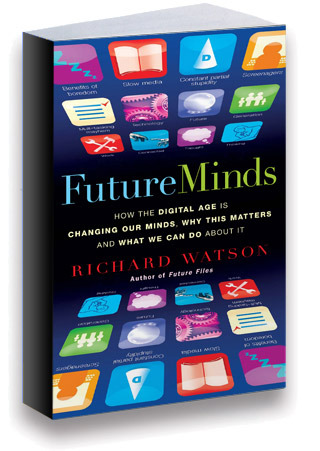 Just reading Future Minds by Richard Watson was a story in itself!

I started reading the book as soon as it was released, because after I read Watson’s first book, I’ve been thinking about his trends of the future ever since, and regularly comment on his blog. About one and a half chapters from the end though, I lost the book on the tube one night (after a few “sherbets” I should add), never to be seen again. I emailed Watson, asked for a second copy and it arrived. Thank you Richard. I waited until I’d finished reading “What Would Google Do?” before finishing off Future Minds.

By Watson’s own admission, Future Minds started off as a different book to it’s current title. Watson wanted to write a book on the best places to ‘think’. What’s the most appropriate architectural layout of a building? What works and doesn’t work? Is a messy desk more productive than a tidy one? Thankfully my the messy one wins over the tidy one (e.g. my next door neighbour at work!).

Watson has an easy reading style. When I received the second copy of the book, I finished the last chapter and a half in one tube journey into work. And I’m not a fast reader at all.

What I appreciate about Watson’s research is that it forces the reader to take a step back from normal life and look at it from a macro view. You want a more personal communication style? Then write a letter rather than a short email. You want a child to learn about something? Then let them read a paper encyclopaedia rather than perform a Google search. While you’re reading the book, real life experiences will occur that confirm Watson’s narrative. As with the first book, you find yourself like a nodding dog whilst reading it.

Watson goes into the process of creative thinking. Creative thinking will (according to Watson) become vital because machines and efficiency drives (Lidl need fewer shelf stackers because they simply put the pallet on show in the supermarket) will be able to perform a high percentage of all the tasks we currently perform. The only thing machines are less likely to be able to do in the medium term is creativity.

One of Watson’s recommendations is that for a day each week, you should turn all devices off, and your thoughts will naturally start to file themselves together, and you’ll be able to think much clearer. When I met Watson, I said that this seemed very similar to the monotheistic faiths that all describe a Sabbath as that day of rest. Watson actually goes a step further and said that one day a year, try to do absolutely nothing – again most monotheistic religions have at least one day a year of fasting and all work is forbidden – in order to forget about our usual activities, and be able to concentrate (when was the last time you did that for 10 hours straight?).

I met Watson at the RSA where he gave a talk on the book (a long highlights version is on YouTube). His thoughts clearly polarised the audience. The first question from the audience was a woman who said that last week she opened the front door and saw some black clouds above. She went back inside to look up the weather report on her computer, and when it said “rain”, the penny dropped and she realised her reliance on technology had taken over her common sense. Other people simply think he is anti-technology however I think he’s trying to call out “Use it in moderation!” In the last 10 to 15 years the general population has jumped head first into social networking, Googling and texting. He’s not saying any of those three are necessarily bad, he’s just warning that they don’t replace face to face friendships, encyclopaedias and conversations respectively.
In summary I found the book as thought provoking as the first one. It’s useful to work inside IT/digital media and have someone talk about technology use in moderation, and to remind me that my creative thinking doesn’t occur in the office or in front of a PC – like most people, it’s upstairs in the shower. Now that’s a thought to leave you with.