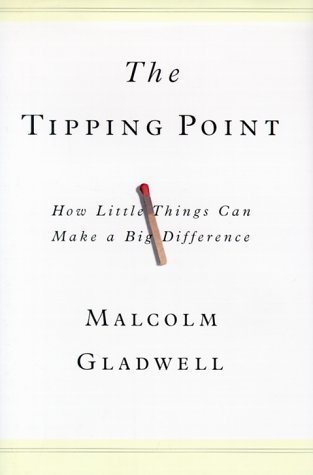 At a meeting in December a client recommended I read The Tipping Point by Malcolm Gladwell based on the books I was recommending that he read over the holiday season.

Tipping Point is about what makes a specific idea become mainstream, of ‘epidemic’ proportion. It do this in two ways – firstly by simplifying the entire process and communication chain from the initial idea through to mainstream, and secondly by referring to some case studies in a level of detail.

Interestingly Gladwell doesn’t talk about technology – all the case studies are pre-Internet – the American Revolution, Hush Puppies and Sesame Street.

However, if you’re looking for a book to help you launch your latest website and make it go ‘mainstream’, the framework Gladwell describes is just as relevant in cyberspace as it is in the case studies that he presents.

For instance, Gladwell describes that the early adopters, or Mavens as he prefers to call them, are absolutely key to the success of a product, whether that’s a product, TV show or social change. And our experience at Endava with client sites agrees with the Mavens theory. Think of all the company or brand Facebook Pages (capital P) which only have a few hundred ‘fans’, compared to other ones which have millions (Manchester United, Starbucks, Adidas, etc).

Mavens are crucial to the success of a new site.

Early adopters are fundamental for launching a new site. Gladwell describes early adopters as natural-born-helpers who want to provide feedback and help start the correct messaging. Think of the early adopters on Twitter or Facebook – these are the people who work out the benefit of using the sites, provide proactive feedback (sometimes without being asked) and then start inviting friends to them.

That’s just the start of the communication chain, and Gladwell defines each of the links in the chain very simply and practically.

The book is definitely worth reading. My advice is that if you find yourself agreeing with the first third of the book, there’s no compelling reason to read the rest of it. Except for how New York changed its crime rate.