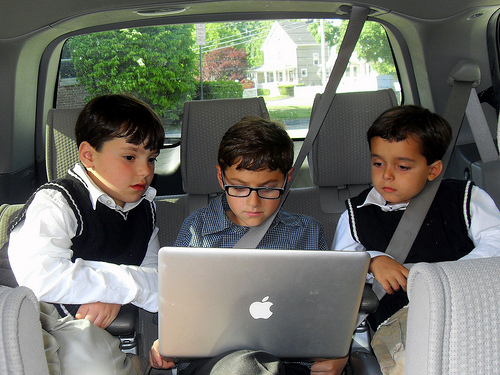 One of the joys of having children is looking at the world as you know it from a completely different viewpoint. Watching my own children use the Cbeebies website before they could even read remains the best demonstration of usability that I’ve ever seen.

My children now span school years 1, 4 and 5, and from about year 3 onwards, a large proportion of homework is done on a computer. My kids’ school uses a national website where kids have their own login, and it sets the homework for the child. Wikipedia has replaced Encyclopaedia Britannica, and Google Image search has brightened up essays.

Most of the time, the kids use [the excellent] Google Docs for documents (they’re a little too young for spreadsheets), and they use PowerPoint for presentations. However there’s a huge usability difference between the two applications which the kids really struggle with – and it’s a major difference between Google and Apple iOS versus Microsoft applications: the concept of ‘saving’.

However as soon as children start using Microsoft Office applications, they need to save their documents and presentations, and suddenly the complexity of computers comes crashing down – drives and drive letters, folders, even filenames add on a level of technology that Google and Apple have done such a great job of removing for the last five years.

The next version of Office needs to address this once and for all. The necessity of files and all of their relations – drives, folders and file extensions, can now safely be removed.