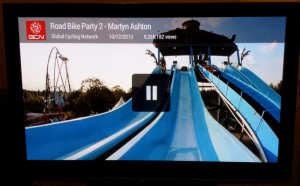 I’ve been looking forward to the UK release of Google’s Chromecast device for such a long time now that I’d considered buying a US version and shipping it over. However I was delighted to see them go on general sale in the UK late last week.

Chromecast is Google’s answer to Apple TV, providing a number of services (or apps in fashionable parlance) such as iPlayer, Netflix and YouTube to a standard television. There’s no remote control – you use your phone or tablet (either iOS or Android) to control the device.

And the device is tiny. It looks like a slightly larger USB stick, but with an HDMI plug at the end, to connect into the back of your TV.

I’d heard users complain that the device needs an external power source (which is supplied), but personally I didn’t find that a problem.

Technically, Chromecast is a small Android device that happens to output via HDMI. It has a WiFi chip and some storage for the operating system, apps and configuration.

Setting up the device is straightforward – it recognises WiFi networks, and needs a

From this point on, apps already installed on your phone or tablet such as iPlayer, Netflix and YouTube recognise Chromecast is available as an output screen, and you can ‘send’ Netflix or YouTube to the television. In practice, it’s simpler than this explanation.

Technically, the phone is simply telling Chromecast where to stream content from (e.g. a specific YouTube video), and then Chromecast does this independently of your phone. To prove this, my phone ran out of power on the first YouTube video (it was nothing to do with Chromecast!), and switched itself off – yet the video kept playing.

The YouTube videos that I played were excellent quality. We don’t have fibre at home yet – although it’s less than a fortnight before its due to be installed; and videos played smoothly in HD quality. Up until this point I had been unnecessarily concerned that YouTube videos would appear blocky and low quality. It’s superb quality.

The only remaining functionality on offer is through a laptop connected to WiFi on the same network. If you have the Google Chrome browser installed, and download the Chromecast browser extension, you can choose to ‘cast’ or output a tab to the television. The tab then appears as full screen on the television. The feature is in beta, which doesn’t mean a great deal in Google terms, and is OK in use. Content is clear,and sound is fine, but animation is quite jittery and there’s some buffering.

If you want to show a web page on a large television, it’s by far the simplest method. I think it’s been designed as a feature to show services, sorry – apps, which aren’t native to Chromecast yet.

We have now configured several devices in the house to use Chromecast, so that anyone can control it.

One of the most amazing things about Chromecast though, is the price. It’s a one-off £30. I ordered mine from Amazon and it arrived the next morning (on free postage).

If you don’t have a games console hooked up to a TV and want to watch Netflix or iPlayer, or a few YouTube videos, I can’t imagine there’s an easier or cheaper way of doing so.

Google didn’t create Chromecast simply to stream YouTube and Netflix though.  Chromecast is a competitor to both Apple TV, which is a set top box; and Samsung’s smart TV television range. Google’s philosophy is to create open technologies, so Chromecast works on any TV with an HDMI connection, using any device – iOS, Android or any computer that can run a Chrome browser.

Google are creating various apps under the banner of Google Experiments such as the Photowall app below. Chromecast could easily become the standard platform for TV apps, in the same manner that Chrome has become the standard browser to surf the web.

Google Chromecast is a remarkable, and affordable, piece of technology that is set up in an instant, switches on immediately, and is easy to use. This is the future shape of television.

Thanks to Rob P for helping round off this post with the Photowall example.