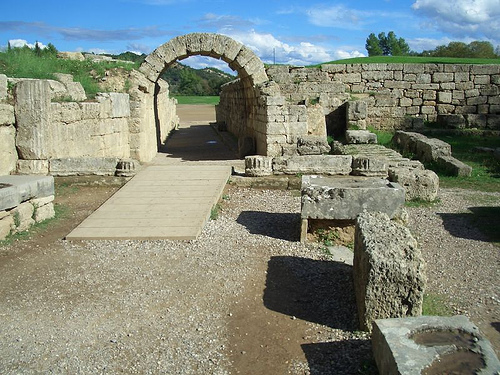 I watched my nine year old son doing some homework this week on the computer and noticed for the first time that Google didn’t just point him in the right direction to answer a question, it actually provided the answer.

He didn’t think anything of it. He thinks that Google is there to provide answers, and is an absolutely reliable source of those answers. He doesn’t question the validity of the source any more than I would have questioned Encyclopaedia Britannica when I was his age. I found that it was a further leap for Google-kind than even, two years ago.

The question was “Who watched the ancient olympics?”

He actually typed in “who watch the ancient olympics?” which actually brought the answer closer to the top of the results than the grammatically correct question. That’s a separate issue I’ll have to deal with and it was difficult to ascertain whether he typed in the incorrect grammar to obtain the best results rather than a genuine mistake.

Education is changing at an amazingly quick rate. My son’s [state funded, primary] school has an interactive projector in every classroom, and is aiming that within two years will have a laptop per child.

Children are being taught to use Google to search for answers.

In Richard Watson‘s book, Future Minds, he describes how it took less than a generation to go from reading long form (e.g. a paper article on Ancient Olympics) to consuming bite sized snippets on a screen. I don’t have a major problem with this leap, except for the fact that we need to understand and accept that general knowledge will deteriorate because children will only know exactly what they’ve searched for, rather than anything broader.

Reading the paper article, or even one of the search results’ full articles would have taught my son that the games used to be one day long, then five days long, the different events, and even that in boxing, the boxers would wear hard leather straps with metal over their knuckles – ouch.

2 thoughts on “Google the answer engine, not ‘just’ the search engine”