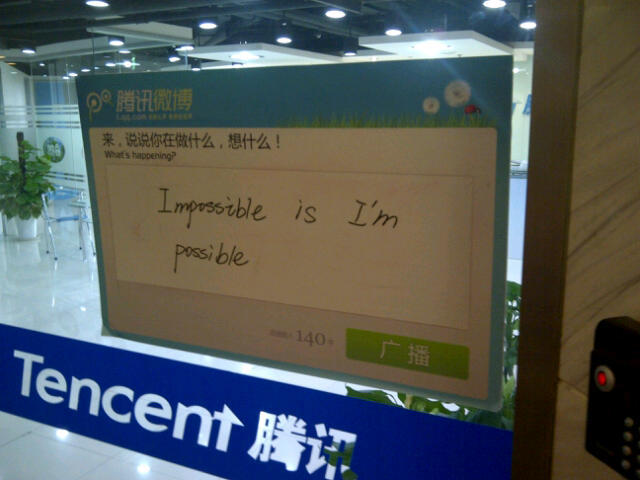 Thank you to Tom Broom, a former colleague from IMG who moved to the Hong Kong office and sent me the photo above from one of their clients, Tencent.

Tencent is an interesting company. On its homepage it says:

Founded in November, 1998, Tencent, Inc. has grown into China’s largest and most used Internet service portal. In its ten-year history, Tencent has been able to maintain steady and fast-paced growth by always putting its users first. On June 16th, 2004, Tencent Holdings Limited (SEHK 700) went public on the main board of the Hong Kong Stock Exchange.

If ever a company undersold itself, Tencent would be at the top of the tree.

In a nutshell, Tencent provide a portal, and ISP service, as well as a gaming platform, e-commerce site, online payment provider, Instant Messaging tool, mobile portal, e-books and SMS services as its products and services.

Most people in the UK have never heard of Tencent, so here are some financial highlights from their Q1 2012 report:

Their user numbers are equally impressive:

I find it fascinating that whilst most US/ UK B2C digital offerings are focussed on advertising models, especially Facebook and Google, Tencent are earning money from subscription models and e-commerce. They have found the holy grail of finding ways of getting users to pay for services. Apple have managed it with the App Store – before Apple, users simply wouldn’t pay for services via a mobile.

Tencent’s e-commerce site is remarkable. It contributed just under $120 million of revenue (8%) to Tencent. It’s growing so fast that it’s now a separate business unit. The e-commerce model is similar to Amazon – they sell their own products, and provide a market place facility for other retailers to sell their wares.

And finally, let’s do a stock market comparison against the West’s equivalent wonder child, Facebook – take a look here unless of course you own Facebook shares.

2 thoughts on “Heard of Tencent?”