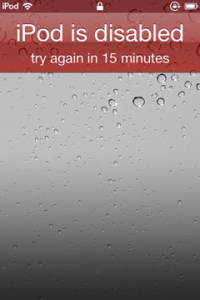 Sometimes we think that modern computers are so advanced and powerful, and then it all gets blown away in a few moments.

For the last few days my kids (well, the three eldest ones) have been saying their iPod Touches don’t work. Actually, that’s inaccurate. The truth is, two of them had forgotten their passcodes and had been locked out of their iPods, and the third one had given his iTouch to a friend ‘to do something cool to it’, and ended up with an iTouch that didn’t show all of the installed apps, and generally behaved a bit ‘weirdly’.

This evening I sat down to write a couple of blog articles on my home PC. As I logged in my anti-virus program alerted that I had two apps installed which were critically out of date and must be installed. One of them was no problem. The other one was Java.

Java. Apparently it’s used to run a billion or so devices including washing machines and cars (according to the installation screen which I’ve seen a few times this evening). So why is it so hard to install on a PC? I am reasonably technical, but I had to download the installer three times and wander all around sun.com and java.com to actually install the thing.

So there I was, well actually, here I am, forty minutes after sitting at my PC and I haven’t actually done anything productive, just updating apps.

All programs could learn a few things from Google Chrome. It automatically updates itself. It can be configured to provide the same experience across numerous computers (including remembering passwords, etc.) And when I open Chrome, I’ve set it up so that it opens with the same websites as when it closed down.

If you’re designing a PC app at the moment, take a look at Google Chrome’s user experience. Especially from the updating and troubleshooting point of view.