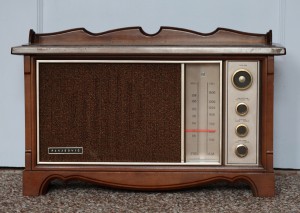 We have a Spotify Premium account at home, mainly because we want to listen the tracks offline (such as in the car), and also because the freemium model limits the number of tracks available.

I really like Spotify – the PC and iPhone apps are both easy and no-nonsense to use. The quality is great, which is important because we have speakers wired around the house.

I read an article last week explaining that when ATM machines first arrived, it was assumed that the ATM would see the demise of high street bank branches. However, 45 years after the first ATM machine in the UK, we still have bank branches.

This got me thinking about music. The appearance of Internet services such as Spotify has seen all but the end of music shops in the high street, but we still listen to music radio stations. The media group which owns Heart, Capital, Classic FM, XFM, Choice, Gold and LBC boast an audience of over 19 million listeners per week.

Why do radio stations get such a large audience in the 21st century? I think there are a number of reasons:

I listen to the radio mainly for discovery. I like the radio playing a random song, or a brand new song, when its different to anything else I listen to.

The problem with Spotify and its equivalent ‘radio’ modes is that they are trying to find music that is similar to the music you already like. There are some basic algorithms in some music players, which try to determine whether you prefer groups, male or female singers and then play only those to you. Spotify provides a little wider coverage in its radio mode, but it still won’t play something as left-field as the FM radio channels.

And long may it thrive.