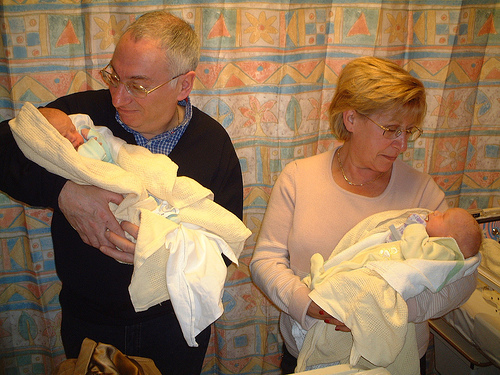 The photo above was taken eight years ago and shows my parents and my identical twin daughters Shelley and Natalie. I’m pretty certain that it’s my dad on the left and my mum on the right, however I can’t tell which baby is Shelley or Natalie.

Before I joined IMG I worked for a Finnish telco company called Sonera. At Sonera we enabled consumers to use mobile phones to ‘sign’ – to prove their identity. We used the SIM card in the phone as a secure, unique system. At the time (late 1990s) the system was designed from the ground up to be secure enough to sign mortgage papers.

As the Internet has matured over the last few years, the issue of identity hasn’t gone away, however it has changed subtly. It’s now possible to create an anonymous Twitter user, build up a few hundred followers and start a malicious rumour. This is why I find it hard to digest newspapers who reference Twitter for their news content.

It is quite secure for consumers to run a Google search for a product, land on a site they’ve never seen before, and hand over their credit card details. The main reason for this security is that your card issuer (bank) will provide a level of reimbursement if the website fail to deliver the goods.

However we are soon going to find that it’s necessary for end users, the consumers, to have a valid identity.

We’ve read how some of the people accused in the British riots have been banned from using their Facebook account (which is ridiculous because they probably phoned someone as well, yet their mobile isn’t being revoked, but I digress). There is nothing to stop that person from creating a new Facebook account straight away. In fact, Facebook’s friend suggestion tool is so accurate that it will help recreate all that user’s friends as well.

In order for the Internet to truly grow up and allow us to vote online and perform all the duties we’ve previously done in the Post Office, we need to sort out digital identities. Digital identities in the UK have always been seen in a negative light, despite the irrational xenophobic fear whipped up by some of our national newspapers. However we’re going to need to jump over this fear if we can issue these digital identities.

These digital identities will be used to sign into most websites and will work across mobile, web, TV and anything else that springs up.

In order to apply for a digital identity, financial services organisations will require stringent checks – just like a passport, but probably with someone physically checking the photos and documents face to face. This is why Facebook Connect isn’t the right platform for an Internet-wide ID platform.

The Internet is truly global, and the identities will need to work globally too. They will probably be government run, although it’s feasible for some of the larger financial services companies to run them.

Like so many technology vendors, Sonera was doing the right thing, just at the wrong time – about 15 years too early.