Airbnb’s investors have reportedly pushed the company’s valuation to over $10bn, leading some industry commentators to claim that this type of valuation proves we are in a second dotcom bubble. 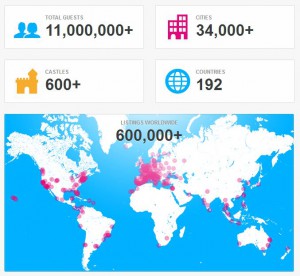 Remember, the first dotcom bubble had many weak business models where pretty much any company that had a domain name was worth billions.

This time round, there are some sound business models, which are disrupting industries not rebadging it. Airbnb is a disruptor, and needs to be examined before we come back to the question whether we’re in another bubble.

Some commentators are comparing Airbnb to Lastminute.com. While Lastminute.com was seen as revolutionary for its day, it was essentially just another retail channel for existing travel operators – perhaps you could describe it as the latest style of travel agent. Whereas Airbnb is a total disruptor to the travel industry.

Airbnb is a marketplace which enables anyone to rent some space in their home to another person – in Airbnb parlance they are described as a host offering space to a guest. It doesn’t have to be a spare room – there are plenty of sofa beds available to rent.

It’s also worth noting – because the valuation reflects so – that Airbnb is one of those rare products which has managed to target small, cheap offerings such as the sofa bed marketplace, to short-term, full house rentals in nice areas. It’s also used by business travellers as well as tourists. At Endava, I know some of our suppliers who stay in Airbnb locations when they visit London.

Airbnb is a global phenomenon. Because Airbnb is a pure marketplace, a bit like eBay, it handles no (expensive) stock, or supply chain, or bulk upfront purchasing from travel operators. This keeps its profits consistent.

Airbnb’s launch was perfect timing – during a recession when people want to earn more money (by renting out some space), and others want to stay somewhere for less money.

Some commentators are saying that the model is simple to duplicate and therefore Airbnb will be a short-term investment. However Airbnb has become synonymous with renting space in someone’s house – it is already the first place to check. And as more people book through Airbnb, and users rate hosts and guests, the user ratings will become more reliable in the same way as eBay’s rating system has become. See “No one wants to stay in an axe murderer’s house, and no one wants to rent a spare room to an axe murderer“.

And that’s where I can foresee a problem – if Airbnb receives some negative publicity about a robbery (or worse) between a host and a guest, this could destroy Airbnb’s reputation overnight.

So are we in another bubble?

I’ve demonstrated how Airbnb already has a solid business model, with some potential pitfalls. Now let’s return to the original question: are we in another bubble?

There’s always a flip side

There are examples of company IPOs and valuations which do seem high at the moment.

For instance King, the makers of Candy Crush, have IPOd today valued at $7.6bn (shares were also 7 times oversubscribed). This is a company who operates in a highly disloyal market of smartphone games, although I think there’s room in app stores for a giant games publisher equivalent to EA in the games console market.

Then there’s Facebook who spent $2bn in WhatsApp and yesterday spent $2bn on Oculus VR which is a brand new company, with only 75,000 orders to its balance sheet. In my opinion, WhatsApp was a great purchase because it’s been, and still is, a major disruptor to the telco industry, and Facebook need to increase its instant messaging and voice product offering. (Read this Bloomberg article to see how much of a disruptor WhatsApp really is).

The Oculus purchase currently feels like a very high valuation, although I still stand by my prediction that 3D environments will take over web browsers for many applications in the nearish future.

In conclusion, the current stock market conditions and valuations are not the same as the first dotcom bubble. There are some companies which are currently overvalued (in my opinion), but there are many more who are here for the long-term.

(Disclaimer: Please don’t base any of this content as investment advice – they are simply my personal opinions).

1 thought on “Is Airbnb’s $10bn valuation proof we’re in a second dotcom bubble?”