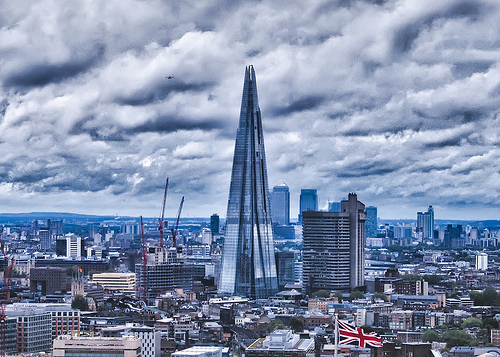 A couple of weeks ago I had the pleasure of being invited to near-the-top of the Shard. The Shard is a brand new building above London Bridge station. It’s 310 metres tall, and is currently the tallest building in Europe. I was invited up to the 52nd floor, which gives an amazing view over London.

I’m not allowed to include any of the photos that I took on the visit. In fact, I posted the images on Flickr and received a call shortly afterwards from the landlords asking me to remove the photos, which I did instantly.

I was invited by a school friend who works as the IT Director for one of the construction firms working in the Shard.

The building is so high that my mobile didn’t have a phone signal.

The Shard is currently a construction site – on most of the floors there is only a concrete shell and windows. On some floors even the basic services haven’t been finished.

I have another friend in the army. Specifically he is in the infantry. He can’t tell me a lot about what he does, although he can say that his role is to set up a wireless router as soon as they reach an advanced position, so that the army decision makers can track their precise position and send secure digital instructions.

Literally, while someone in his group is putting up a shelter or digging a trench to hide in, my friend is connecting to the Internet!

These roles both demonstrate how IT infrastructure is so critical, from the front of a battlefield to the 300 metres above London.