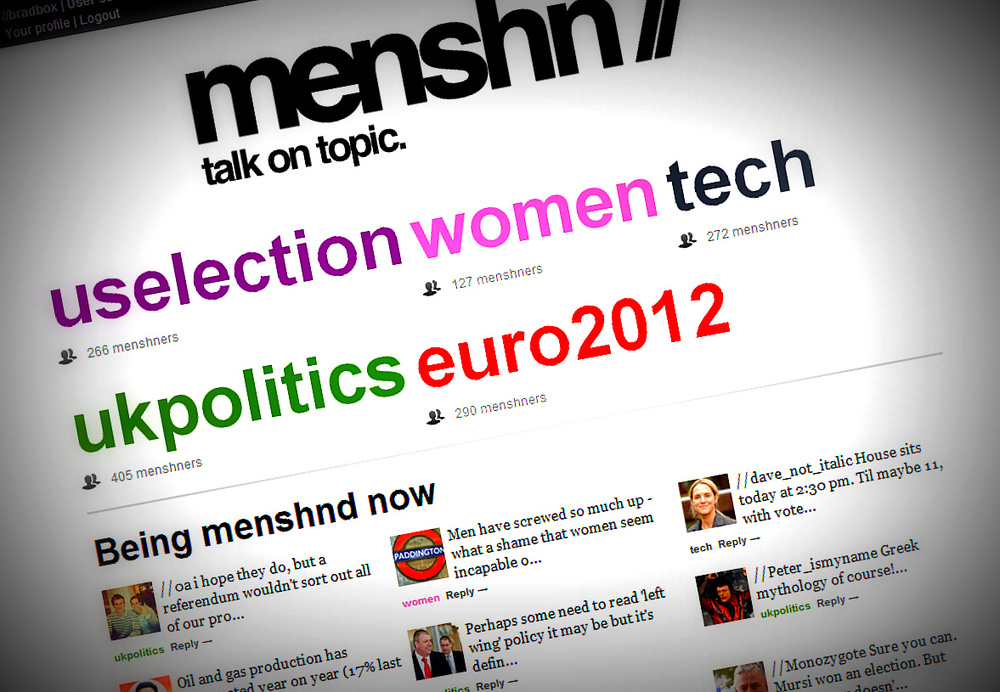 Another month, another new social network. But this time there’s a difference – the new latest best thing is British. Menshn caught my attention on the BBC News website last Wednesday. It’s been launched by Conservative MP Louise Mensch who is actively participating on the new network (I can vouch for this because we had a quick digital exchange over the weekend).

Menshn is a combination between Twitter, mainly because of the 180 character limit on content updates, and classic discussion forums.

At the moment the forums are fixed – in fact there are only 5 ‘topics’ – uselection, women, tech, ukpolitics and euro2012. I suspect that the latter topic will close down soon.

In fact, that’s the point – if a topic doesn’t have any updates for a period of time, the plan is that it will automatically close.

Menshn has all the feeling of being created on a tight budget. There are several bugs in the platform, but I’m guessing that most early adopters almost embrace the 75% finished platform. More traffic will attract more funding, and more funding will iron out those bugs and provide more features (such as user generated topics).

Menshn was launched in the US apparently to help support the US election campaign. The original plan was to launch in the UK in the next few weeks, however I received an invite on Sunday morning and registered straight away. The first surprise is the amount of publicity and traffic (Menshn has had almost 200k uniques in a few days) and that each of the five topics only have a couple of hundred members.

It’s nice having the topics rather than the complete lack of structure that Twitter has survived with. I can’t quite put my finger on what Menshn provides over traditional forums and discussion boards, except to say it provides more of a real-time conversation ‘atmosphere’ than forums which feel like they happen more slowly.

Because of the conversation/ group style of Menshn, it means that if you provide a legible update, chances are someone will respond, rather than Twitter which can seems like a whoever-shouts-loudest approach, or sometimes like a mass-announcement platform rather than conversational.

Menshn appears to be moderated at the moment, and I’m not sure how much longer this will continue, or whether topic owners will be able to moderate their own areas.

In the meantime, I wish Louise and the rest of the team at Menshn the very best of luck with this British adventure, and hope it grows into a success story for them all. Contact me at @bradbox on Twitter or //bradbox on Menshn at any time!