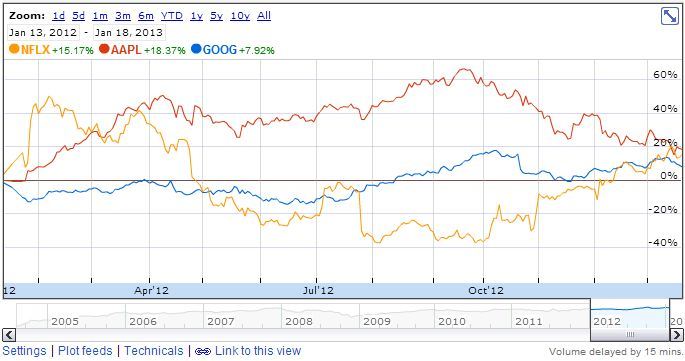 Three very interesting sets of financial results have been released in the last few days from digital companies.

The future of watching video?

The company now has 33m subscribers worldwide after a 10% increase in the last quarter. (2m new subscribers in the US in the quarter, almost double the previous quarter, and 1.8m internationally in the final three months of 2012).

The Company sold a record 47.8 million iPhones in the quarter (that’s worth reading twice to take it in), compared to 37 million in the Q4 the previous financial year.

Apple sold 12.7 million iPods in the quarter, compared to 15.4 million in the year-ago quarter.

The most staggeringly impressive result is that gross margin was 38.6 percent, albeit it’s lower than 44.7% in the same quarter in the last financial year. International sales accounted for 61 percent of the quarter’s revenue.

Remember that Google is less than 15 years old…

Google had $50 billion in revenues for the first time last year.