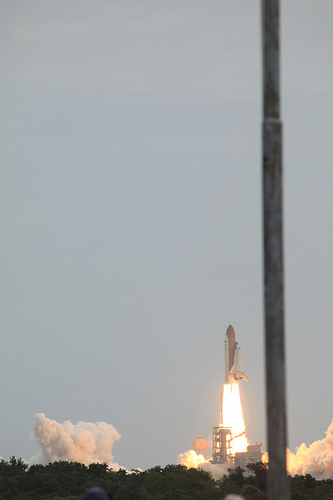 Whilst I don’t have many regrets in life (and I hope I’ve apologised for most of them), the one thing I just wish I’d done was to have seen a Space Shuttle launch.

I can’t imagine watching a static object the size of an office block move 15 miles in under a minute.

I went to the Kennedy Space Centre when I was 18 and I remember the sheer scale of pretty much everything. NASA had to build custom machines to move other custom machines because they were so big – and this chain went on and on. NASA have been breaking rocket science boundaries since their inception.

In the UK we’ve had a few days full of publicity about closing of News of the World, a newspaper that’s 168 years old. In 168 years time I think we’ll miss the short, 30 year reign of the Space Shuttle more.

The image above is courtesy of the very fortunate Robert Scoble on Flickr.