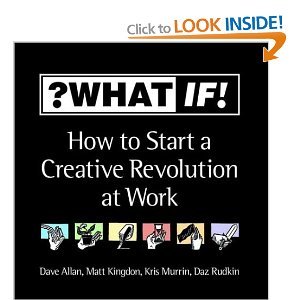 I first read this book some 3 or 4 years ago whilst working at IMG. One of the senior Creative Design guys bought the book and handed around to a number of people.

It’s full of handy tips on how to make people around you become more ‘creative’. Creative in this sense is simply to think a little more laterally, rather than the art or design sense.

In fact, I’ve always disliked the term ‘Creative Agency’ or ‘Creative team’ (such as a graphic design team), because it implies that they are the team who are responsible for new ideas, and no one else. I’ve worked for a number of other companies in the IT sector who have had some incredibly ‘creative’ ideas on new products, new processes and ways of improving parts of the business, each of which haven’t had a ‘Creative team’.

Anyway, back to the story of the book… I saw it on Amazon a few days ago and was amazed to see that it’s now out of print, because I found it so helpful. Anyone who has worked with me for the last 3 or 4 years knows that I have a couple of pet hates, such as starting a sentence with ‘But…’ – well this book is responsible for it.

The next time you are having a conversation and someone starts a sentence with ‘But…’, ask them to rephrase the sentence, and you’ll be pleasantly surprised with their reaction. Their facial language will pause whilst they try to articulate why they tried to squash whatever it was that you were talking about so quickly, and they might even change their mind.

I’ve picked up colleagues and customers on answering with ‘But…’, and almost always had a good reaction – even if it’s forcing them to consider what they are saying.

If you like the example and are interested in more helpful tips to encourage creativity rather than squash it, you can buy it from Amazon for less than a fiver including delivery.