This is the sixth post of the monetisation series, and is about how Free trials can be used by large digital audiences.

Free trials should not be confused with a Freemium offering. The Freemium model is a long-term model which offers customers something for nothing, and an opportunity to buy something more for a price.

Free trials is usually a temporary offer (otherwise it wouldn’t be a trial!).

END_OF_DOCUMENT_TOKEN_TO_BE_REPLACED

Sponsored placements or sponsored posts or promoted content are one of the latest forms of monetisation I’ll be discussing in this series.

Imagine you were the CEO of Twitter before it made any money. You have several million users all posting content all day long, and several more million users consuming this content without posting.

You have a few options at this stage – you can make the website look the same as all other websites and sprinkle some ad placements over the page, but this won’t work on mobile and it may devalue your proposition of keeping a vertical conversational timeline simple.

END_OF_DOCUMENT_TOKEN_TO_BE_REPLACED

In today’s Western digital businesses, advertising is the main source of revenue for websites, mobile sites, mobile apps and anything in between:

For the fourth quarter 2012, Facebook’s revenue from advertising was $1.33 billion, representing 84% of total revenue.

Personally, I believe the advertising industry is in a bubble which is ready to burst. It is a semi-self-fulfilling industry that has been growing at a rate out of proportion to the businesses revenue which support it.

END_OF_DOCUMENT_TOKEN_TO_BE_REPLACED

This post is the third of a multi-part article on methods to monetise large digital audiences. The sponsorship model can be used for any size audience, and varying levels of content quality – it all depends on the organisations the website is attracting as sponsors.

Sponsorship is essentially a fixed promotion. Whether it’s putting a logo on a section of a website or a Formula 1 mirror, it’s a longer term arrangement than an advert.

END_OF_DOCUMENT_TOKEN_TO_BE_REPLACED

This post is the second of a multi-part article describing methods to monetise large digital audiences. The freemium model is one of the most modern monetisation methods in the series.

The concept of freemium is to offer a free service, and if users want more content or functionality, they must buy a subscription.

One of the most common freemium products is the music service, Spotify. Users can download Spotify and immediately listen to music. If users want to be able to listen to the music when an Internet connection is unavailable, or they want to listen to ad-free music, they need to pay a monthly subscription.

END_OF_DOCUMENT_TOKEN_TO_BE_REPLACED 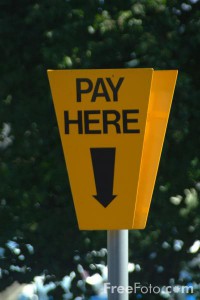 The digital subscription model is similar to a paper magazine subscription – users periodically pay to keep receiving content, whether it’s daily, monthly or annually. The digital version is often called a paywall.

In order to implement a paywall, the website owner requires a registration mechanism and a payment system. The registration system can range from Facebook Login to a proprietary implementation.

For the payment system, there are systems which can be tailored, to third-party providers such as Apple’s App Store. The issue with the latter, is the commission can be as much as 30% of the value of the subscription. The upside of course, is that the content owner doesn’t need to worry about the billing, the integration is often easier, and the third-party (such as Apple of Google) handles chargebacks and user support.

END_OF_DOCUMENT_TOKEN_TO_BE_REPLACED

The UK’s Mail Online newspaper website now has 189.5 million monthly unique visitors, that’s two and a half times the population of the UK.

Working on a month of 22 weekdays plus 4 weekends, the Daily Mail sells 52.1 million newspapers, read by 129.4 million people. Whilst it’s difficult to compare those readership figures with the website’s monthly unique visitors, there’s probably the same level of inaccuracy in both figures, which can make them ballpark comparable.

Back to the website for a moment – how can a monthly readership of almost 190 million users be turned into revenue?

END_OF_DOCUMENT_TOKEN_TO_BE_REPLACED

In the next couple of years, TV will change significantly, both from a distribution, content and rights point of view.

From the rights point of view, UK customers have until now enjoyed a single provider for all their television. This has slowly moved to multiple providers, for instance Netflix and a Sky subscription. With BT winning the Champions League rights from Sky, this leads us further down the path of more subscriptions – similar to the US television model.

On the content side, we’ve’ve seen new companies commission (the TV word for “fund and then produce”) new shows. The leading example here is Netflix and their House of Cards production. See the stock price chart above – House of Cards was released on Netflix in February 2013. Netflix’s share price has doubled since then, and the second series is being released on Netflix next month.

While traditional broadcasters are churning out low-quality reality TV, Netflix are hiring A-list celebrities to produce high-quality drama. Which one is likely to attract the most viewers?

For the latest new television technology, 4K, it’s the distribution method more than the screen technology that I find interesting. I’m not playing down the advanced engineering and manufacturing to get 4,000 pixels working completely separately resulting [finally] in pure black.

4K will be the first television media technology distributed over the Internet before physical media.

In the past we’we’ve used DVDs to introduce HD technology (before satellite and then digital terrestrial broadcast).

With 3D TV (I never saw the point personally and I think we’ll see 3D services being quietly shut down this year), it was available on DVD and then satellite too.

The first 4K broadcaster will be Netflix. Think about that… a seven-year old company is beating the BBC and Sky to a new consumer broadcast technology.

And the reason for this is straightforward. The infrastructure required to support 4K is already in place. 4K “only” requires a (stable)  8 Mbit Internet connection. To distribute this over satellite television would mean removing some other channels – there isn’t the remaining bandwidth to broadcast all of Sky’s existing channels and a new 4K one. This is also why so many of Sky’s SD channels seem low quality – they have been compressed to squeeze the data into the broadcast.

Digital cinemas have been using the internet to download 4K movies for some time. A 4K movie is between 90 Gb and 300 Gb. Although, a cinema can afford to take a long time to download the film if it is only allowed going to be viewed in a few days’ time. With Netflix, which is currently streaming only, you’ll need that stable 8 Mbit connection.

What does this all mean for consumers?

Two things. The first is that we are moving ever toward non-physical content: think rental, or Spotify, not buying DVDs.

The second, is if you are planning to buy a 4K TV, make sure you’ve got a decent Internet connection.

I like reading autobiographies to understand what makes people tick and how they meet their aims. (Incidentally I have ‘Drive’ on my reading pile at home at the moment). The Guardian website has a great article on the daily routines of history’s most creative minds. It’s very interesting, and in itself it’s a summary of the book Daily Rituals, by Mason Currey.

SEO (Search Engine Optimisation) is a skill that everyone in Digital Media should understand. I try to brush up on my SEO skills every couple of years, so I’m halfway through SEO: An Hour a Day. I’ve read a few SEO articles and wanted a book which I could concentrate on without distractions. It’s comprehensive and approaches SEO correctly – i.e. from a business goal point of view and not ‘I just want to appear higher in Google results’.

One of the best SEO articles I’ve read online was from Jeff Bullas. It only takes a few minutes to read, and it’s very worthwhile.

The Tao of Twitter is the best resource I’ve read about how to use Twitter. It was easy to read in a couple of days. I then went back through the book with a highlighter pen over all the simple hints and tips. Thoroughly recommended.

And finally, I read an academic white paper called “RIPTIDE: What Really Happened to the News Business”, subtitled “An oral history of the epic collision between journalism and digital technology, 1980 to the present”. It’s over 120 pages and has taken me a couple of months to read (I have too many distractions when reading a PDF).

If you have any interest in content publishing – digital or traditional, you’ll like this paper. Some of the biggest names on the Internet and business contributed to the white paper, include Sir Martin Sorrell, Eric Schmidt, Arianna Huffington, Tim Berners-Lee, Dick Costolo, and the list goes on. The paper was produced in September 2013, so it also covers Jeff Bezos purchasing The Washington Post.

Here’s a really good, practical, infographic on the ideal types of social media post including timing.

I’ve seen a number of similar infographics before but this one has been well summarised and kept simple. Try the tips below and let me know if you see any improvements.