It’s been an interesting week at Netflix, with US subscribers falling by 120,000.

The reason why password sharing on Amazon Prime is much lower than Netflix is probably because it’s easy for a friend to purchase an Amazon product once you give them your password. Possibly just as undesirable – it’s straightforward for people to review purchases on your account once you have given them your password!

I’ve been asked a few times this week, why Netflix and Amazon don’t clamp down on password sharing. I think the answer lies with a comment from Spotify.

Think of those Netflix users who are using someone else’s password as ‘freemium’ subscribers. Spotify encourages freemium (non-paying, or trial) accounts to learn “that music is an important part of their life worth paying for”. And consider the data from those listeners, how Spotify can “learn from the biggest possible group of music fans in the world.”

Freemium places a user on the path to a sales conversion. It’s a far better path than traditional or digital marketing channels. When people share a password, it shares the value of the product, that might want to make them ultimately go and buy the product.

Gotta say I rate these @Spotify adverts on the tube pic.twitter.com/i4wsWOfl7R

Netflix has a vastly different strategy to Spotify though. Netflix is testing the maximum price that users are willing to pay for the service. It recently increased the monthly subscription cost in the US from $11 to $13. END_OF_DOCUMENT_TOKEN_TO_BE_REPLACED

The latest Ofcom media report has been released, and here are some of the highlights:

END_OF_DOCUMENT_TOKEN_TO_BE_REPLACED

It’s time for my annual blog/ RSS feed clean up, and to share my preferred thought-provoking digital news feeds:

1. Chris Matts (The IT Risk Manager). Chris regularly updates his blog with practical advice for technology teams and senior managers such as “executives and transparency”, and he focusses his agile transformation articles on business managers rather than technology teams. That said, there are also a fair number of more technical articles about automated testing and development. https://theitriskmanager.wordpress.com

2. Doc Searls. Doc has several interests, mainly in privacy, photography and technology. Whilst I don’t agree with his extreme views on privacy and anti-advertising, his blogs and other feeds are very interesting to read occasionally. http://blogs.harvard.edu/doc/

3. Google Webmaster Blog. there are several skills everyone in the digital industry should have, and one of them is an overview of search engines and how they work. The search engines are the key footfall, entry point, gateway and provider of revenue to almost every digital company. Stay up to date with Google on this blog. https://webmasters.googleblog.com/ END_OF_DOCUMENT_TOKEN_TO_BE_REPLACED

On Tuesday I went to the Deloitte TMT predictions (that’s Telco, Media and Telecommunications) event at CodeNode in London.

I’ve covered several of Deloitte’s events in the past – they’re often thought-provoking and insightful, based on some decent consumer research and with a good amount of humour thrown in.

“We’ve entered the beige phase” of mobile phones – they’re all looking the same, with consumers unable to differentiate new features.

One of the stand out quotes was that smartphones are now in an area of “invisible innovation”. That is, the connectivity (e.g. 5G), camera, processors and so on, are all improving, but consumers don’t see these. END_OF_DOCUMENT_TOKEN_TO_BE_REPLACED 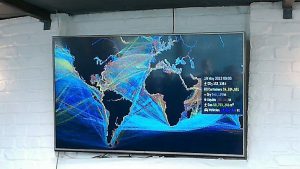 Richard started by describing how Mondelez has pulled £100M from their advertising recently due to the lack of impact that their digital advertising spending is having. They’ve never pulled ad spend before the holiday season. END_OF_DOCUMENT_TOKEN_TO_BE_REPLACED

One of the interesting principles we’re seeing with new digital companies are the new digital business models.

The internet coined the term ‘as a Service’ (with the postfix ‘aaS’), which essentially rents shared platform ‘space’ or utilisation. These are usually available on a minimal-term contract of a month. One example here is Amazon’s hosting facility, AWS (Amazon Web Services) which offers hourly pricing, in a market which used to have annual contracts.

Linked to this are ‘marketplaces’ which combined large numbers of sellers and buyers. The biggest examples here are eBay, Alibaba, and Amazon. Apple App Store and Google Play fall into this category.

These marketplaces transformed into other offerings, such as what we now call crowdfunding (e.g. Kickstarter) and charity sponsorship (e.g. JustGiving). END_OF_DOCUMENT_TOKEN_TO_BE_REPLACED

Insurance is perfectly positioned for a radical digital transformation over the next few years (or maybe months) – customers feel they don’t get value from insurers (unless something goes wrong, at which point they see the value); there is a general poor to dreadful customer experience of most insurers; there are still antiquated business models (why do we still have to buy annual policies? Why can’t we have subscription-based or pay as you go policies?); and then there’s the fact that most car insurers don’t make much profit in the first year of a new customer either.

Here is some insight from two recent insurance events where the main topic has been about digital transformation, disruption and innovative ideas. END_OF_DOCUMENT_TOKEN_TO_BE_REPLACED

Last night I went with some colleagues to a Media Society event called “Newsprint – It’s Ain’t Over Yet?” After listening to the panel and some of the questions, I think the end of printed newspapers could be nearer than previously thought.

The panel consisted of two academics, Professor Roy Greenslade and Professor Jane Singer both from the City University London; Sarah Baxter the Deputy Editor of The Sunday Times; Christian Broughton, Editor of The Independent; and Alison Phillips, the Editor of The New Day. Professor Greenslade was the chair, and Alison sent him a text half way through the event to say she couldn’t make it. END_OF_DOCUMENT_TOKEN_TO_BE_REPLACED

I’m in Romania this week presenting a variety of speeches, including the keynote of MobOS entitled The future of mobile. It’s been a challenging speech to prepare for – and was considerably harder than I originally thought. Not least because in technology terms, “the future” means different things to different organisations. One organisation might think some future of mobile concept is way-out-there while another may have already been using it for a year.

I’m going to talk about four areas on the future of mobile – context, the number of devices we use, mobile user interfaces and the central hub concept. That will set some foundation for some ‘left field’ concepts that we have for the longer term future of mobile. END_OF_DOCUMENT_TOKEN_TO_BE_REPLACED

Earlier this week I was on a panel at the ITC (Insurance Technology Congress) 2015 event. My panel was dealing specifically with Internet of Things in the insurance industry.

The event was aimed at CIOs of large, mainly commercial insurance companies. The CTO and CIOs in the room spend their time and budget keeping the lights on – i.e. keeping their systems in tip-top shape.

These CIOs and CTOs are rightly proud of their systems’ stability and availability, and until now innovation is a distant second priority. However, new technologies and technology companies are entering the market, and this conference was a joining of minds to create a plan for the future.

Note: Endava were sponsors of the event, and I was only able to attend the first day of the event. END_OF_DOCUMENT_TOKEN_TO_BE_REPLACED