Four and a half years ago, Endava took over the Digital Media arm of IMG. We looked at the service IMG were offering our customers at the time, and remarked that we were providing a Digital Media PaaS (Platform as a Service), or more specifically, SaaS (Software as a Service) way ahead of the rest of the market.

We were ahead of the curve and spent the next couple of years educating organisations and suppliers about PaaS, SaaS and cloud hosted Digital Media products. Various organisations joined our platform.

Some didn’t agree with this approach and continue to buy licences, servers and host internally, until usually something goes wrong or the key resource who holds everything together leaves the organisation.

There have been three key tipping points in the industry which has helped promote SaaS offerings over traditional licensing and hosting internally:

These tipping points sold the IT organisation and marketing organisations the benefits of SaaS.

My recent visit to New York confirmed that SaaS is now a standard requirement when companies asked us to confirm “And you’ll be hosting this, yes?” and “Do you have your own cloud hosting, or will you be using a public cloud?”

The concept of asking the client how they’ll host the solution themselves is as alien now, as asking about SaaS four years ago. 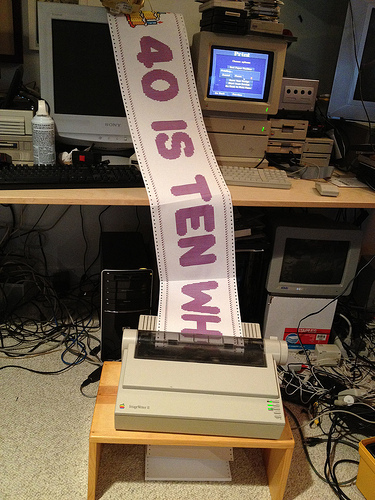 I mentioned that I took part on a Big Data/ BI (Business Intelligence) workshop recently. My first job after university – in 1994 (no gasps at the back please – I know I don’t look old enough) was as a developer providing an EIS (Enterprise Information System) for NHS clients.

We took large amount of data from Patient Administration Systems (PAS – again, no sniggering at the back if you work for Endava please (private joke)) and provided graphical dashboards which often exposed ‘intelligence’ in the data which would have taken much longer to process in standard databases. And the data was too large to import into Excel.

There are many off the shelf products, many of which are open source, which makes implementations far quicker to implement today than fifteen years ago.

Another great piece of re-branding is thin-clients. In the late 1990s, moving to a thin-client model (i.e. most of the processing was done by a server) was fashionable. We then moved back to thick-clients – where the processing is mainly done by the desktop. Then the Internet age was born, and we never heard about thin or thick clients, because they were rebranded as ‘browser-based’ and apps. Exactly the same model, just rebranded.

Infrastructure has gone through some great rebranding. The term ‘hosting’ was left untouched for 10 years, before virtualisation – which wasn’t really a new concept. Citrix have been doing it for ages in the desktop industry. But suddenly every CIO felt compelled to virtualise virtually everything (pun intended).

And then… “Cloud”. I remember speaking to clients early on about Amazon Web Services, and within three years every hosting company rebranded their virtual environments as Cloud. Nothing more than rebranding. My personal website is stored “in the Cloud”. When I first took out the contract it was a Shared server, then a virtual server… now a Cloud server. It’s just the IP address has never changed!

My final example of brilliant branding is Enterprise social media. Lotus were doing Enterprise Collaboration in the 1990s – boasting shared documents with workflow and permissions.

I’ve had a couple of emails asking what I think of Google Drive.

Firstly I’m a bit disappointed with Google’s lack of innovation. I’d have expected a few bells and whistles because they are late entrants into the market and have the benefit of watching their competitors and market makers.

I’m growing sceptical of new Google services. If Google Drive doesn’t take off, yet a business has used it for all their file server needs, migrating all those files and links to them is going to be a nightmare for any organisation.

And this is the inherent problem with immature cloud services.

This blog uses Posterous which was bought by Twitter a month ago. If Posterous is discontinued, I need to migrate all the content (relatively straightforward but a hassle nonetheless).

I use Brinkster to host my websites and domain names. For the cost of using 500Gb on Google Drive, I get the same amount of FTP storage, thousands of email accounts and a Microsoft web server thrown in.

Cloud storage is the first step to consumer IT virtualisation. Soon we’ll all be using virtual PCs via a web browser. Google started this with Google Docs and Picasa Web Albums. Creating a generic file storage area is misaligned with their goal of eradicating the need for local files.

We now have a situation where the key players in the market all have competing file storage and online services – Apple, Microsoft and Google. It will be interesting to see how they compete.

This week I’ve received two email newsletters which have both directed me to a broken website when I’ve click on any link in the newsletter.

Email newsletters provide an intermediate website so that when a user clicks on a link, the email sending company can tell who clicked on which links, and provide the stats back to the brand that’s running a promotion. That’s all messed up if the email company’s website is down though, which seemed to be the trend this week.

The first company was an industry newspaper, so I wrote to the editor who replied within seconds to say she’d look into it. What’s the point of having journalists hit a deadline for the email newsletter, if no one can read/ get to the article?

The second company was a promotion from a vendor. They probably paid a reasonable amount of money for the email list and sending the newsletter, only for it to result in no click throughs.

At Endava we use ExactTarget for the majority of our clients’ emails (some clients choose their corporate or legacy vendors) and we’ve not seen this problem from them. 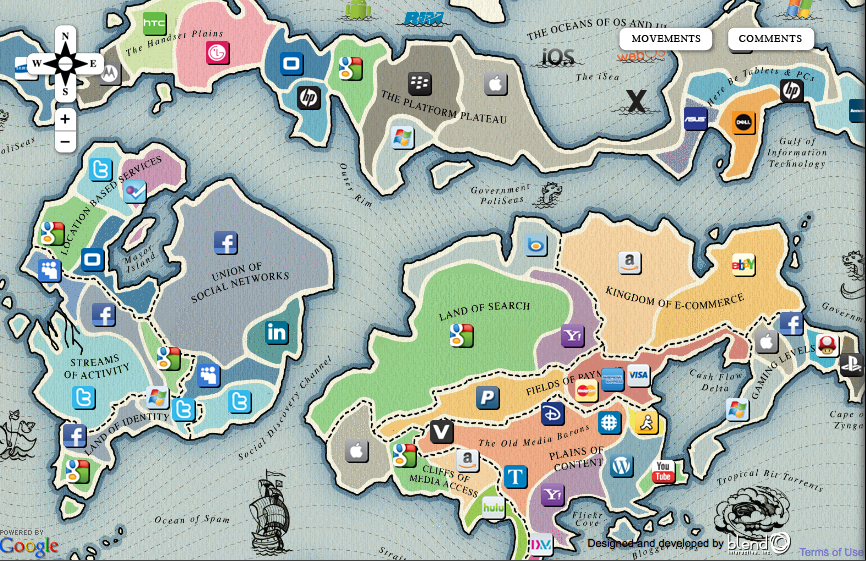 Thanks to Richard Watson for noticing this excellent new map from Tim O’Reilly via Ross Dawson.

I’ve seen a similar map before, concentrating on social networking. This new one however shows how different industries including payments, platforms and so on, all inter-relate.

Either way, at least the map gets the thought process going.