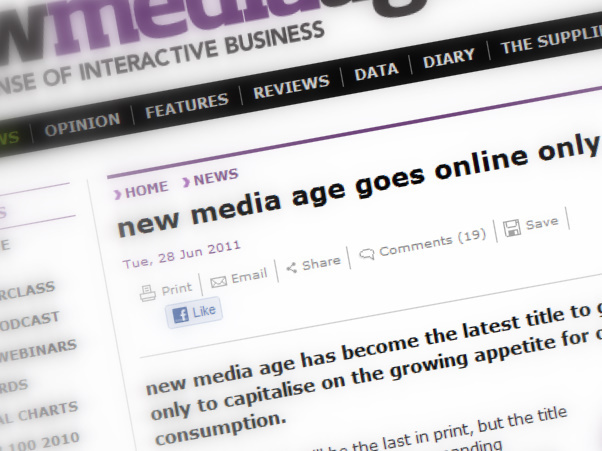 One of the best magazines in the digital industry, new media age, has become digital-only by stopping it’s print edition. The week old announcement isn’t really newsworthy or blog-post-worthy by itself, however the user and subscriber feedback has been fascinating to follow.

new media age (all lower case) by definition has a digital-industry-focussed subscriber base. The print edition is subscription only (£100 per year). One would have thought this group of people are early adopters, and preaching the use of the Web as the way forward.

There have been 19 user comments on their announcement. Put into context, there have been only four comments in total across the 17 most recent articles – it really isn’t a site rich with user feedback.

Those 19 comments are mostly negative, complaining about a lack of user feedback to lead to the decision to go digital only (interesting in a world of ‘transparency’ and social networking in digital media) and some subscribers went so far as to offer to have continued subscribing to the print edition at a higher cost rather than announce it was too expensive to produce.

Many users claim that reading the digital edition is too difficult to read – that paper is better, it’s easier to rip out articles or annotate them. Some users said that they like to get away from screens (three users literally wrote word for word how nma got them to move “away from my screen”) and read paper – I wonder if those users work for digital agencies or not.

My personal view is that whilst I catch up with the latest news online, most content isn’t as time sensitive as we’re led to believe and yes, I prefer to read paper magazine rather than a tablet or mobile device. I find I can concentrate for longer when reading paper over a screen.

Take a look at the original article and read the user comments yourself.

One final point for transparency – Endava is a paying subscriber of nma and we also appear in the Top 100 agencies.