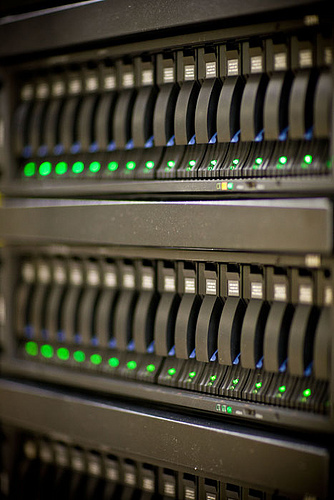 I went to a Microsoft hosted seminar this week on “Azure (Microsoft’s public cloud offering) in the Enterprise”. Microsoft have hired David Chappell for a worldwide tour. David is a fantastic speaker, and the truth is that I wanted to see David more than hear about Azure!

If there’s something consistent about Microsoft events, it’s the fact they know how to choose their venues. Their campus in Reading is impressive, if a little sterile. This time it was in the Royal Mint Court opposite the Tower of London.

David started the talk by defining the term ‘Cloud’.

I have been vocal about the difference between virtualisation and Cloud. To me there’s a huge difference, but the problem is that so many competitors in the market call their virtualised stack a Cloud, that it’s easy to look uncompetitive if you don’t join in the buzzword marketing bingo game.

David’s definition of Cloud is:

A self-service portal on top of pooled hardware.

If either of those don’t exist, you’ve got a virtualised infrastructure, not a Cloud. Sounds fair to me.

If this Cloud environment is hosted on your own hardware, it’s a Private Cloud. If the hardware and self-service portal is available from an external provider, it’s a Public Cloud.

On David’s tour across the US and Europe so far, apparently the feedback he’s been receiving is that the UK are among the most advanced Cloud users. We (in the UK) believe that the Cloud is the future, and enterprises are already starting the migration. Geography is important with the Cloud, because so many different countries and industries have different compliance measures that it can become difficult for some enterprises to move right now.

We also discussed the main reason most organisations think they want to move to the Cloud… cost. However most organisations don’t know the TCO (Total Cost of Ownership) of a web app, let alone the monthly or even hourly cost, so it’s impossible to compare. Adding in the elasticity of the Cloud makes the TCO argument much more difficult and I took this away as a “You need to start working out these time based TCO costs soon”.

The whole session, much to David’s credit, was highly interactive, with good questions and companies discussing their own case studies.

One company claimed they now didn’t own any infrastructure at all. I’ve been saying for a while now, that if I were to start a company tomorrow, I wouldn’t own any infrastructure either. Why does anyone buy a mail server any more? A mail server needs an ant-virus server and an archiving server. Or you can get an Office 365/ Google Apps service on a per user cost that has these services bundled together, without the support costs.

We’re now seeing companies without any infrastructure at all – their workforce have laptops connecting them to all their remote services, from email to file storage, CRM, accounting, and the list goes on.

Big Data also came up in conversation. Companies can either create their own Hadoop clusters, or use a public Cloud (Amazon, Google and Microsoft all offer similar services). Why would you want your own Hadoop cluster, which requires skill to setup, additional servers (tin) and maintenance, when you can quickly spin up new clusters when you need them?

I asked the group whether they have ported third party software into the Cloud. From my experience software companies are behind on the commercial models that Cloud environments require. Typically you buy software licenses and then pay annual maintenance. But what happens if you shut down a server for a month, or a week, or an hour? You still need to pay for the license. What happens if you need extra servers for a few hours a week? You need annual licenses for this.

The group said that they either had to buy additional licenses or were just given bulk licenses from the software vendor for the same cost they were already paying. David’s answer is that because enterprises are only starting to move to the Cloud now, software companies aren’t under any pressure to change their models. This will change as enterprises do move to the Cloud.

David asked him why he wasn’t charging a premium for a hosted platform, and the vendor answered that it costs him less to host than the people required to support customers installing it themselves, and he’d prefer to move his customers over to the PaaS offering. Time will tell if this model is adopted more widely. The fact is that software vendors will need to change their models whatever happens.

And now on to comparing Azure against the other two big Public Clouds from Amazon and Google. The prices are all very similar and lowering to beat each other, so it’s not price.

Microsoft’s USP is very simple – Microsoft partners have experienced Microsoft support for several years. You can speak to a Relationship Manager and a support desk. Have you ever tried getting support for the others?

I’m trying to move an email domain from an Exchange server on to Google Apps at the moment for my personal email. However there’s a problem with my Google account because I once registered for a Google product that is now discontinued. And that problem is blocking the Google Apps migration. There’s no phone number to call, not even an email address. I have to ask a volunteer on Google Groups to help me. It’s taken two weeks and I’m still getting the error message.

So, Microsoft are using the superior support argument as the reason to move to Azure, and I agree with the logic. David explained that we trust Microsoft as the Operating System, which is the easiest point of entry to break into; far easier than trying to break into a Microsoft Data Centre – so data security shouldn’t be a blocker to move to the Cloud.

Enterprises moving their services to the Cloud is already happening, at least in the US and UK. There are models we need to deal with – time based, TCO is a difficult measurement before we can hope to measure any ROI (Return On Investment).

PaaS and Cloud go hand in hand, and if Enterprise IT departments don’t understand this yet, I suggest they speak to David soon.